The natural heritage of the Normandy-Maine Regional Nature Park is full of riches. Let’s look at some of the areas representative of the Park: 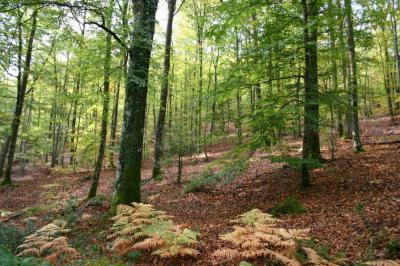 The sandstone ridges, crowned with forest, form the framework mountain area of Normandy-Maine.  Oaks, beeches, pines, spruces… there is no shortage of tree species each creating a different feel and look to the landscape. Amongst the many wooded areas in the region, the Ecouves forest, the Andaines, the Multonne and Perseigne forests are the most extensive. You can easily stroll around and discover amazing species (flora and fauna).

The bocage landscape is also a strong influence on the identity of the Park: the hedges shape the landscapes and provide a variety of fauna. Amongst them, the Little Owl, a stocky little bird of around 20cm which nests in the cavities of old trees.  It particularly likes to be near crops and meadows where it finds its food.

The Park region is defined by its dividing range of mountains or ridgeline and its large network of waterways (over 3000 km) which are home to remarkable biodiversity:

These environments are rare and fragile. They are formed by the gradual accumulation of organic matter (peat) sometimes over several metres deep. Year after year, the vegetation that accumulates creates a soil rich of partially decomposed organic matter. Many remarkable species depend on it, such as carnivorous plants like the Round-leaved Sundew and the Pale Butterwort. 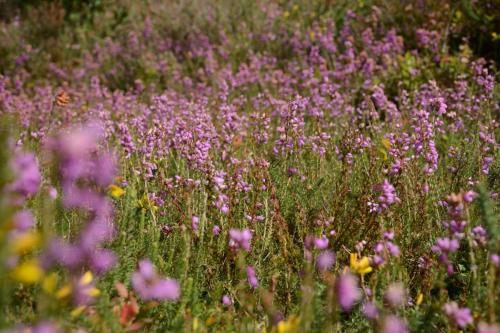 The moorlands are as a result of a soil very poor in nutrients coupled with extensive agricultural practices (grazing and mowing of the molinia (moor grasses) to create a litter layer. Widespread in the Park a few decades ago but they are now in decline. These natural environments are not only notable for their low representativeness on the territory but also for the emblematic species they are home to: Harrier, European Nightjar, Bog Bush Cricket, Dorset Heather or Cross-Leaved Heather. The main areas where this vegetation can be observed are the Lande Pourrie Forest, Le Mont Souprat, Les Alpes Mancelles and also Les Bruyères de la Coudraie.

East of the Park, in the Paris Basin, erosion caused by rivers has cut into the limestone rocks. This has resulted in the formation of valleys bordered by steep, dry hillsides. The steep slopes, exposed to the sun together with the limestone substrate and the pastoral management have allowed the development of short grasses. This forms a remarkable natural space. A specific fauna and flora live here: Pasqueflower, wild Orchids and butterflies – specifically the Adonis Blue and the Chalkhill Blue.

The scree can be seen on the slopes of the ridges. They developed during the last glaciations, 2 million years ago. They are as a result of the shattering of rock under the repeated action of freezing and thawing: “frost-weathering”. Rarely seen on the plains, screes exist here and there in Europe on the last reliefs of the Hercynian range (range of mountains formed 400 and 250 million years ago). In western France, the screes are concentrated almost exclusively on the Park, the most remarkable of which are in the Vallée de Misère and in the Alpes Mancelles.